This is the Kaw (Kansa) nation tribal project near my home.

It's exciting that they are coming back to this small section of their home area after the squatters pushed them out in 1873.  The site is near Council Grove, just off the Santa Fe Trail (Highway 56).
Posted by Kitty Frank, Realtor at 3:53 PM No comments:

Even though the little girl in the photo doesn't understand that the tank behind her is a massive weapon of the United States Army - her mommy wanted to get a photo of them in front of it.  Her daddy was very nearly not her daddy - the tank just like this one he was in in Iraq 2005 set off an IED which completely destroyed it.  Had there been all four soldiers in the tank that day, at least one would not have lived through it.  I'm behind the camera and its about as close as I can get without feeling creeped out. 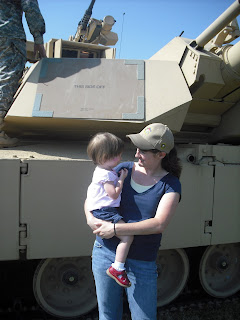 Our young military families are carrying huge emotional burdens that haven't been around since we left Vietnam.  Please, step forward and shake the hand of a soldier today.  Look him or her in the eyes and give a sincere thank you.  That's all they are asking for!  There will be years and years of healing!
Posted by Kitty Frank, Realtor at 3:15 PM No comments:

Kitty Frank, Realtor
On my 60th birthday, I walked out of a tall building in downtown Wichita, Kansas with my new license in hand after passing the Real Estate Agent test. With a background in economics, grant project management, community development, entrepreneurship and job creation and retention....I guess that shouldn't be surprising. But, I am a little peeved that none of you mentioned to me that real estate was probably an excellent fit for my personality and talents! Good thing I believe that's as long as you're breathing - it's never too late to follow your dream.